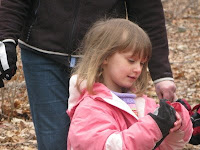 Today Spring arrived, along with a dusting of snow. It was a cold day, but we spent a large part of it outside anyway. Bess and I went to her Winter Walkabout at Schiff Nature Preserve, which is by far our favorite activity of each week. The other kids in the class are a lot of fun, and the teacher, Lydia, is simply wonderful - sweet, patient and knowledgeable.

Personally, the thing I like best about spending time at Schiff is that Bess is a whole different person when she's there. Most other times, she is a whirlwind, "Hurricane Bess" we call her. Her attention span is minuscule, and her frustration tolerance is almost equally so. But when we're there, she is patient, engaged, and attentive. Last week, we were making fox tails as our craft, and she sat there for almost twenty minutes (twenty minutes!) putting crepe paper and beads on a pipe cleaner. I don't know that I've ever, ever seen her sit still that long before!

I think that place might be magic, but it also got me thinking a lot about Richard Louv's idea of Nature Deficit Disorder. In his book Last Child in the Woods: Saving Our Children From Nature Deficit Disorder, he talks about the lack of unstructured outdoor time from which our children suffer. He theorizes that this disconnection from nature is largely responsible for the epidemic of attention deficit disorder in the United States, and that most children who suffer from attention issues would benefit immensely - be cured, even - by simply spending time outside. To be sure, there are some elements of his book that I don't really love (such as his stance on hunting and fishing), but I can't deny that my experience with Bess certainly supports his hypothesis.
Posted by Kelly Coyle DiNorcia at 7:58 PM