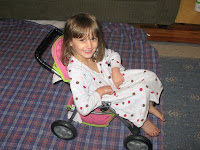 Today, I walked into the living room to find Bess sitting in her doll stroller. I suggested that she might not want to do that because it wasn't really designed for girls, and she might break it.
"Mommy, it's not a stroller, it's a wheelchair. I'm Monty."
Monty is a character from an episode of the television show Little Bill, which was created by Bill Cosby. The goals of the program are to promote images of diversity, and to show an inner-city African American family as loving, educated, and kind. Oddly enough, I recently read a study of this program, and of the Monty episode in particular, that concluded that it represents the next wave of multicultural education. It seeks to expose the roots of group stigmatization by examining it's impact on a number of stigmatized groups (i.e., women, African-Americans, people with handicaps, etc.) as well as by showing people who belong to these groups simply living their lives instead of using them as "teaching tools".

So, I'm not sure how I feel about this whole Monty-wheelchair thing. My first reaction was to discourage it, but then I thought about it and realized that I don't really discourage her from imitating any other characters she sees on television, in movies, or in books. What's the difference between wanting to be Monty or Word Girl? Perhaps I am concerned about how a person with a disability would feel if they saw her pretending to be in a wheelchair - but she isn't mocking, she's simply imitating what she's seen, just as if she were wearing Word Girl's cape or Dora's backpack. I decided that the fact that she was imitating Monty indicated that, for one thing, he made an impression on her, and two, the impression was a positive one. So for now, the stroller can be a wheelchair if she wants it to be.
Posted by Kelly Coyle DiNorcia at 2:00 AM