We were supposed to have company last night, but Bess was sick so we ended up cancelling. But, we had planned on making Indian food for dinner, and since had all the ingredients, we decided to go ahead and make it anyway. Then we had the idea to make a day of it, and I went to the library and got some Indian music and a book to read. 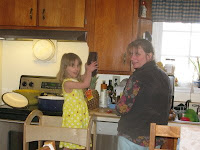 We listened to Putumayo's Music From the Tea Lands and the traditional tunes of Ravi Shankar as we prepared Kheere ka Raita, Vagan Bateta nu Shak, and Palak Paneer. I probably would not make the Vagan Bateta nu Shak (eggplant and potatoes in curry) again - though Harry really liked it - but I think the Palak Paneer (spinach and cottage cheese) could be great with a little work, and the Kheere ka Raita (cucumbers in yogurt) was delish! We got our recipes from Indian Vegetarian Recipes.

Then we read (sort of) Gobble, Gobble, Slip, Slop: A Tale of a Very Greedy Cat by Meilo So. More accurately, we looked at the pictures, since the story of a cat who eats all his friends until some crabs use their claws to snip their way out of his stomach was a little harsh for my personal taste. (I have learned to ALWAYS read stories, especially traditional fables, before reading them to my kids!) But the ink and watercolor artwork is beautiful - I definitely recommend checking out her website.

Posted by Kelly Coyle DiNorcia at 10:33 AM