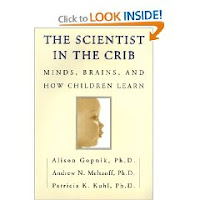 I had two blissful, quiet hours to myself today while Bess was out with her dad and Harry took a nap. I spent them finishing The Scientist in the Crib: Minds, Brains, and How Children Learn by Alison Gopnik, Andrew N. Meltzoff and Patricia K. Kuhl. It was pretty good - as a recovering neuroscientist, I was intrigued by the research they described regarding how babies learn about the world around them, both from a psychological perspective and a biological one. The book was written to bring this science to lay people, so the authors tried to make it conversational, sometimes at the expense of good taste, but overall it was an extremely worthwhile read.
Near the end of the book, they made an observation that seemed to me to be stunningly brilliant. In their discussion of the studies that have been done comparing the brains of rats raised in "enriched" environments to those raised in "deprived" environments, they reported the same old results that have been used to justify all sorts of intelligence interventions from Baby Einstein to reading camp for three-year-olds to attaching headphones blaring Mozart to our bulging pregnant bellies. The rats who were raised in "enriched" environments, with all sorts of different things to look at and do, and other rats to socialize with, had much bigger brains and were better at solving problems than the rats who were raised in the "deprived" environments.
That isn't the brilliant part, though. Wait for it....the authors point out that the word "enriched" is actually a misnomer, because the environment that contained all these things was actually a laboratory-produced approximation of rats' natural environments! Rats were not designed to live in a plastic cage alone, with the same food and water and bedding every day, with their light and dark cycles and even the temperature controlled perfectly by machines. They were designed to thrive in an environment where they had to form associations with other animals, forge for a wide variety of foods and shelter, and avoid capture and injury. So, what we call an "enriched" environment is really just normal.
Babies are experts at learning, at making opportunities for learning happen. The authors of Scientist in the Crib note, and I agree, that by offering our children all sorts of "enrichment" activities, we are at best causing no harm but probably not doing any good. At worst, we may be overwhelming them or distracting them from the things they really should be doing to learn the things they should be learning about the world around them. Humans evolved, for the vast majority of our existence, to be living off the land, hunting and gathering or - later - farming, and spending our time in the activities of daily living. There is inherent value in that - in having our children outside to feel the change in temperature and weather that accompanies the changing seasons, in having their hands in the dirt, in watching a plant go from seed to plate, in smelling the aromas of cooking, the rhythms of cleaning, the satisfaction of providing for oneself.
This is not to say that culturally, artistically or intellectually enriching activities aren't valuable, because I believe, in our global culture, that they are vitally so. However, they should not be emphasized at the expense of all else. Children gain from doing activities that have inherent value, and when we are too busy trying to push them along, push them ahead, enrich their lives, instead of doing normal human things, maybe we're really missing the boat.
Posted by Kelly Coyle DiNorcia at 6:00 AM