An Ode to Laundry

Our dryer broke a week ago. With two small children, two adults, and four animals, this is not a small problem. I realize that people used to have two outfits - everyday and Sunday - but that's not how things are in our house. The laundry has been piling up waiting for the repair person to come.

This week I have learned how often we wash things that aren't really dirty simply because we can. No longer must we wait for a sunny day so that we can put things out to dry - now we simply throw clothes in the washer and then in the dryer, rain or shine.
The mountain of laundry was beginning to become overwhelming, and we have been informed that it will be at least another week before our dryer is repaired. We finally had a nice sunny day, so I decided to wash the clothes and hang it out over the fence to dry. 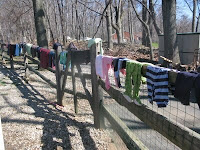 I will concede that it is not the most attractive yard adornment in the world, but I must say that there is something meditative about hanging out the clothes, then bringing it in. It reminds me of Zen Buddhist philosophy. There is also something fresh and invigorating about the smell of clothes dried outside (though the towels are a little crunchy). I am anxiously awaiting our next power bill to see how much we've saved during our involuntary dryer amnesty.

During my laundry meditation today, I began to think about how divorced we have become from the cycles of nature. We do our laundry no matter what the weather. We eat asparagus in November and apples in May. We no longer have any concept of what foods belong to what seasons, and are barely affected by the weather (except, perhaps, for our hair). The change in seasons is a time to rotate our wardrobes...and that's about it.
My husband commented about our use of solar energy to dry our clothes - so of course I felt the need to remind him that, on some level, it's all solar energy. It's just that some forms are more efficient than others. Oil was once solar energy that was captured by plants which were eaten by animals who died and decomposed over millennia and became fuel which was then burned to produce the energy we use to run our dryer (in addition to pollution as the carbon is re-released into the atmosphere). On second thought, the term "solar energy" is probably a misnomer, or at least a misleading term.
I am becoming pretty attached to my laundry meditation time already. It may be time to install a clothesline.
Posted by Kelly Coyle DiNorcia at 8:34 AM