If I Ran the Zoo

Last week we took the kids to visit the Bronx Zoo. Therefore, I also got to re-visit my ambivalence about zoos in general.

Of course, the Bronx Zoo is one of the better ones. Most of the enclosures (with the notable exception of the polar bear exhibit - YIKES!) are not so bad, and they are given some enrichment activities. They have animals there that do not exist any more in the wild, and I had lots of chances to talk with Bess about extinction, and habitat loss, and hunting, and "do you think the animals like being here?" and respect. I do think there is nothing quite like the experience of hearing a lion roar twenty-five feet away from you to help people get a very real connection to the natural world.

That said....they're still in cages (okay, "enclosures"; To-may-to, to-mah-to). They're still away from their natural habitats, and unable to exhibit many of their natural behaviors. It may be good for the species, but I don't think anyone could argue that the individual animals benefit from their captivity. I just don't know.

As for Harry, he was in a pretty foul mood that day. I don't really blame him, he got two molars the next day: 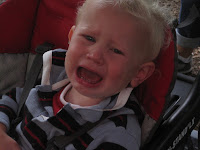 I'll try to get up some more photos later, but Blogger isn't feeling cooperative today and I'm done fighting with the computer for right now.
Posted by Kelly Coyle DiNorcia at 10:09 AM