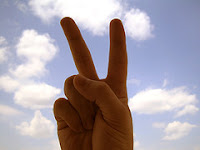 Photo courtesy of flickr user bitzi
I was watching the news this morning (Morning Joe on MSNBC, for the record) as a number of guests discussed last night's Presidential address. I did not see it so I cannot comment on what was said, but one of the pundits this morning was insisting that President Obama does not support our troops because he failed to say that we "won" the war in Iraq and Afghanistan. Apparently he felt that one little word coming from the Commander in Chief would make all the difference for troop morale.
Try as I might, I am having a hard time understanding what exactly it would mean to win this conflict. There were no weapons of mass destruction in Iraq, so that is a moot point. Saddam Hussein was deposed and the Taliban is no longer in power (officially) in Afghanistan, so I guess that's good. We have not caught Osama bin Laden, and I have often heard the argument made that if anything, we have made more enemies and, presumably, terrorists than friends during the years that we've had troops in the area. We have not helped to build a particularly stable government in Iraq or Afghanistan, though from what I've read it sounds like we have helped to build the infrastructure there, and at least they have held elections. Whether those elections are legit, I'm not so sure.
If we have won, then who are the losers? The civilians - the children - who have lost their lives, or their limbs, or their homes, or their family members? Refugees who have had to move in order to avoid the conflict and unrest, the bombs and gunfire? Our own soldiers who have come home injured, or worse?
In war, is there ever, really, a winner?
I am a scholar-turned-mother/activist who is interested in sustainable living and social justice. I have published a number of articles and given presentations internationally on the topics of voluntary simplicity and humane parenting. Learn more at my website www.beautifulfriendships.net.
Posted by Kelly Coyle DiNorcia at 10:12 AM